Radio is the most popular media medium in Africa. In Mozambique, 800 young people and children participated in the making of a radio programme aimed at children and adults all over the country. UNICEF supported the project, which helped these children and teenagers to discuss and share their own interests, opinions and hopes. The programme featured games and arts, but also more serious matters such as HIV/AIDS, violence against children, and drugs. In 2007, the National Radio in Mozambique won an international prize – the International Children’s Day of Broadcasting Award – for Radio Excellence, for encouraging creative thought and the imagination of young people and for collecting and broadcasting material on their own radio programme.

Aurora Foundation contributed to the child-to-child radio programmes with a grant utilised by the implementing partners of UNICEF, Radio Mozambique, Community Radio Forum and TV Mozambique. 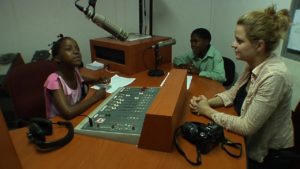 The children’s radio in Mozambique

Aurora fund allocates 111, 5 million ISK to projects in Iceland and in Africa