Emergency Relief due to Ebola Epidemic

Emergency Relief due to Ebola Epidemic

The Ebola epidemic hit Sierra Leone in May 2014, leaving 14,124 people infected of which 3,956 lost their lives. In the autumn of 2014, Aurora received a request from the First Lady of Sierra Leone asking for assistance in battling the epidemic. While the Aurora Foundation’s Charter does not mention contributing to emergency or relief projects, the board decided that such special circumstances called for extraordinary measures and responded positively to the request.

In November 2014, at the height of the epidemic, Aurora formally donated two metric tons of medicines and medical supplies such as protective clothing, rubber gloves and drugs for the treatment of Ebola patients. The goods were distributed to the Ebola centres, which had been set up by WHO and various NGOs around the country.

In addition, a considerable food donation including rice, salt and oil was made to the fishing community in Goderich, to various orphanages and to the homeless. Food distribution was undertaken during a three day sit-at-home period, aimed at zeroing in on new Ebola cases in the country. 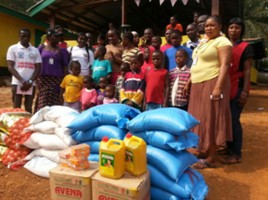 Thank you note from the First Lady in Sierra Leone

Aurora´s support to Sierra Leone in the local media

Aurora is taking on emergency aid in Sierra Leone