Louise Bourgeois is one of the best-known female artists in the world. She was still agile and working vigorously when she died in 2010 at the age of 99. Beginning her career as a painter she branched into sculpting around the middle of the last century and began developing massive installations. Respected as a pioneer in the field she is considered by many to be the artist that bridged the gap between modern and contemporary art. 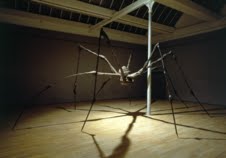 In the year of her one-hundredth birthday, exhibitions of her work were more in demand than ever before. It was therefore an exceptional opportunity for the National Gallery of Iceland to host an exhibition of her works. It was the first one in Europe since the artist had passed away and succeeded in enticing foreign visitors to Iceland for the express purpose of viewing the exhibition.

Aurora Foundation’s grant to the National Gallery of Iceland made the exhibition possible. Furthermore, it facilitated the publication of a book that gave the Icelandic people an opportunity to become acquainted with Louise Bourgeois and her works.

Performing arts, the search and rescue team Ársæll and the exhibition ofLouise Bourgouis at the National Gallery of Iceland are new sponsor projects ofAurora Fund