10% of all new-borns die in Malawi and 17% die before reaching their fifth birthday. The major causes of death in Malawi are HIV/AIDS, pneumonia and malaria. The two latter diseases are particularly hard on children. Paediatric wards – when they exist – are crowded with children suffering from these illnesses. It is therefore imperative to improve and strengthen health-care services in Malawi, particularly for children.

The Mangochi District Hospital serves about 750,000 people and is the primary hospital for the area. It has only 36 beds for children, which is clearly insufficient as on average there are around 80 patients receiving care.

A new hospital wing with 36 beds was built with money from the Aurora Fund, doubling the number of beds allocated to children. Furthermore, 10 beds were added to the intensive care and new-born units and the reception area and the nurses’ duty station were refurbished. In addition, a sewage system including new septic tanks was installed. 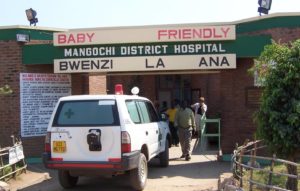 Aurora Foundation funded the building of the new ward and in addition it bought new hospital beds and toys for the children wing.