As her 10-year old daughter Nanah carefully learns to say English words aloud, Kadiatu still takes up back-breaking farming work every day under the hot sun. She is chairlady of a mothers’ group, a pilot association encouraged by UNICEF to boost the chances of girls at school.
“I started the mothers’ club,” says Kadiatu in energetic Temne, one of Sierra Leone’s many local languages. Each of the 75 member mothers contributes Le500 a month (equivalent to about 16 US cents) and together they work a piece of community farmland, selling the proceeds from their cassava and rice crop to fund their daughters’ education at the school.
“Before [our meetings with UNICEF] we didn’t know the benefit of girls’ education,” says Kadiatu. “But now I want all my children to go to school so they can be somebody in the future to help our family.”
While her mother can’t speak Krio, let alone English, daughter Nanah’s favourite subject is English, taught by teachers who recently attended a UNICEF-supported training session to help make lessons more child-centred, so that students participate more in lessons.
“I want to go to school to help my family in the future,” says Nanah, who follows her class attentively.
Several mothers in the club are still children themselves and already have their own one-year olds. Following their own experiences, some, such as 16-year-old Mabinti Koroma, whose baby is wrapped to her back, hope their own daughters will wait until they are at least 19 before they marry.
“I got married and became pregnant very early. It’s not good,” says Mabinti. “I will tell my daughter to go to school and wait until she’s matured to get married.”
Overall only 64 per cent of primary-school-age children are enrolled in primary school. Special efforts are needed to reach Universal Primary Education in Sierra Leone by 2015. There are some positive indicators, including the development of an Education Sector Plan for 2008 to 2015 and the commitment by Government to allocate 20 per cent of the national budget to education annually.
While gender gaps have nearly disappeared in early primary education, of the children who do enroll in primary school, only 11% finish at the right time for their age, and more than 40% never finish at all, regardless of their age or stage. An estimated nine thousand teachers are volunteers, and many teach an outdated curriculum with old-fashioned methods. Gender disparities also increase with age and stage, leaving girls behind: only 15% of girls go to secondary school.
The major barrier to girls’ education is poverty. Children who are orphans or from single parent families are most likely to be out of school, the indirect costs such as uniforms and school materials are a barrier- children often have to work on the farm or look after younger siblings instead of going to school.  Additional factors which contribute to the high number of out of school children include a low level of female literacy; cultural practices, such as child marriage, and the distance to be traveled to attend a school .
Interventions such as those provided by the Aurora Foundation through the Icelandic NATCOM including the construction of community schools, provision of furniture as well as teaching and learning materials and training of mothers’clubs and school management committees and teachers are crucial to ensure enrolment of all children and to enable children to successfully complete their education, empowering children especially girls. 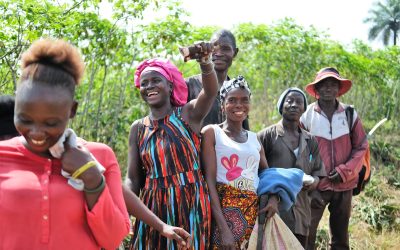