Visit to Aurora´s partners in microfinance in Sierra Leone

Sierra Leone, a country of 7 million people with a wealth of natural resources, should – in theory – be rich. Not only do its waters team with diverse fish species but diamonds, gold and iron ore are also found under its soil. Weather conditions mean that there is huge agricultural potential. Yet, it is one of the poorest nations in the world, with 60% of the population living on less than $2 a day, and 70% youth unemployment.

Though entrepreneurial in spirit, Sierra Leoneans face a big challenge. It is extremely difficult to access finance, and a business idea is nothing without a loan to set it up. Banks lend to those with lots of money and good credit ratings, not first timers. There are very few loan companies in the country which offer money to individuals to start businesses. Without this kind of service, it is very hard to pull yourself out of poverty.

Aurora decided to finance two, existing loan companies based in Sierra Leone’s capital, Freetown. They lent money to G.G.E.M (grassroots, gender, empowerment movement), which was on the brink of collapse during the Ebola epidemic. Managing director, Michael Kamara says, “Ebola was a disaster for business, there was a restriction on movement so traders suffered a lot, and people were unable to pay back their loans. Our company was facing serious liquidity problems”. Just when the business looked like it would buckle, Aurora gave G.G.E.M a $200,000 loan. This was followed by another $100,000.

Mr Kamara at his desk

Mr Kamara used the money to open two more offices in rural areas of the country, one in a fishing town to help fishermen buy boats and equipment. The company’s 6,389 clients, who range from petty traders to badly paid teachers and policemen, can borrow anything from 750,000 ($97) to 50,000,000 Leones ($6494).

“We also work with civil servants who have small salaries”, says Mr Kamara, “They might take a loan so that they can pay their children’s school fees.” When asked why microcredit is so important for his country, Mr Kamara becomes animated: “It is very important! You’ll see that most of the people here are poor, but they are also active, what they need is someone to support them with a small cash injection so they have a chance to work and set up businesses”.

Mr Kamara heads to the streets to talk to some of his clients and see how they are getting on. 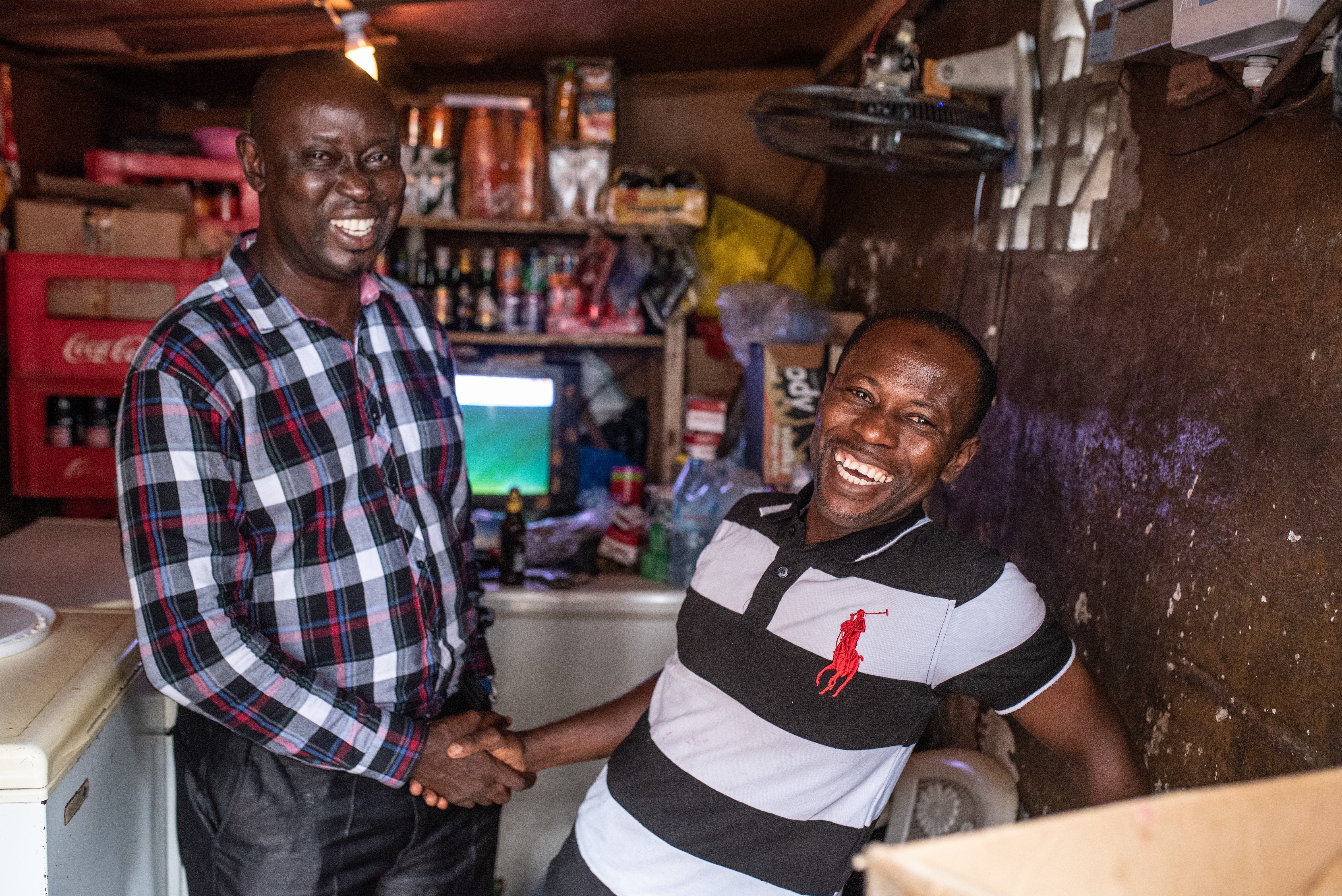 Client Saidu Koroma first took a loan back on 2014. He had a little stall selling soft drinks and wanted to expand his business. Now he has an ice cream machine, popcorn machine, freezer, and TV. He sells beer, soft drinks, cigarettes, sweets, phone credit, ice cream and popcorn. His customers are invited to buy a beer and kick back and watch the game from his shop. “Business is really good now”, he says, grinning. “But I am going to expand even more, next I will stock more food”.

Aminatta Kanneh and her husband have a similarly happy story. They took a loan three months ago to set up a shop adjacent to the one they already have. At the moment they are selling mostly hardware and building materials, but Mrs Kanneh wants to open a clothes shop as well. She used the 30,000,000 Leone ($3896) loan to prepare the shop and buy stock and pays 10% of the money back each month. She says that business is good and through her shop she was able to buy land, send her two children to school and get a car. The clothes shop will bring in even more revenue, she hopes. 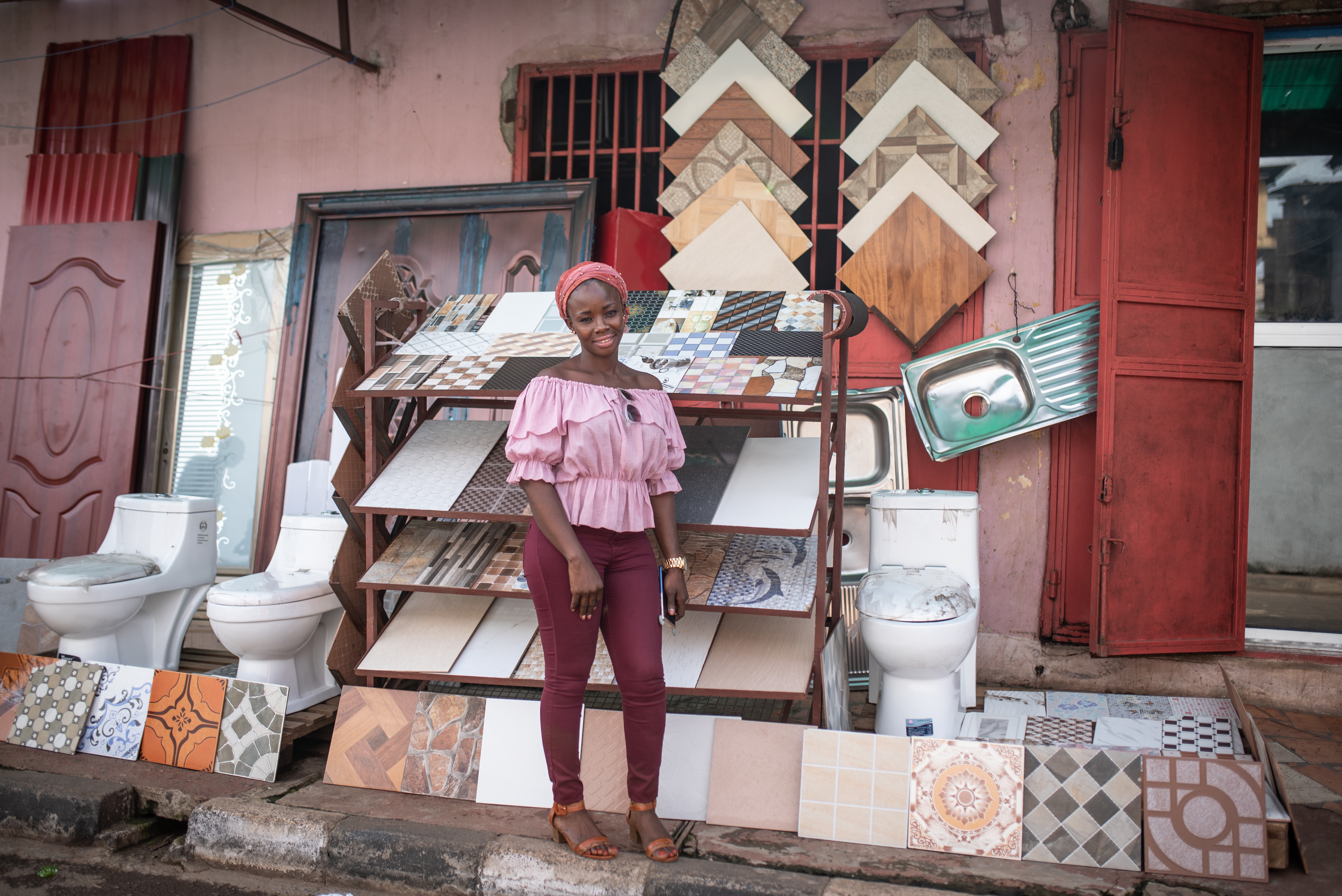 Aminatta Kanneh in front of her shop

At another office across Freetown, David Kamara (no relation of Michael’s!) says that his saving and loan company is also doing well after receiving money from Aurora. ACTB received $1 billion Leones ($129,870) from Aurora in the height of the Ebola crisis. This enabled them to expand and start working with small and medium enterprises; one of which was a truck that a group of men bought to drive around the country distributing food. Restrictions on movement meant that a lot of people could not go shopping, but the government granted this truck special permission to deliver nutritious foods, like fish, to quarantined areas.

ACTB gives loans to individuals too; Mr Kamara believes that both loan types are important. “Microloans can help parents to take care of their kids, put food on the table and buy medicine when they’re sick. Bigger loans for bigger business ideas mean that people can start producing things, and then employ others”. He gives the example of one of his clients who started making soap in her garage. “Now she has expanded and employs four other people”, he says. 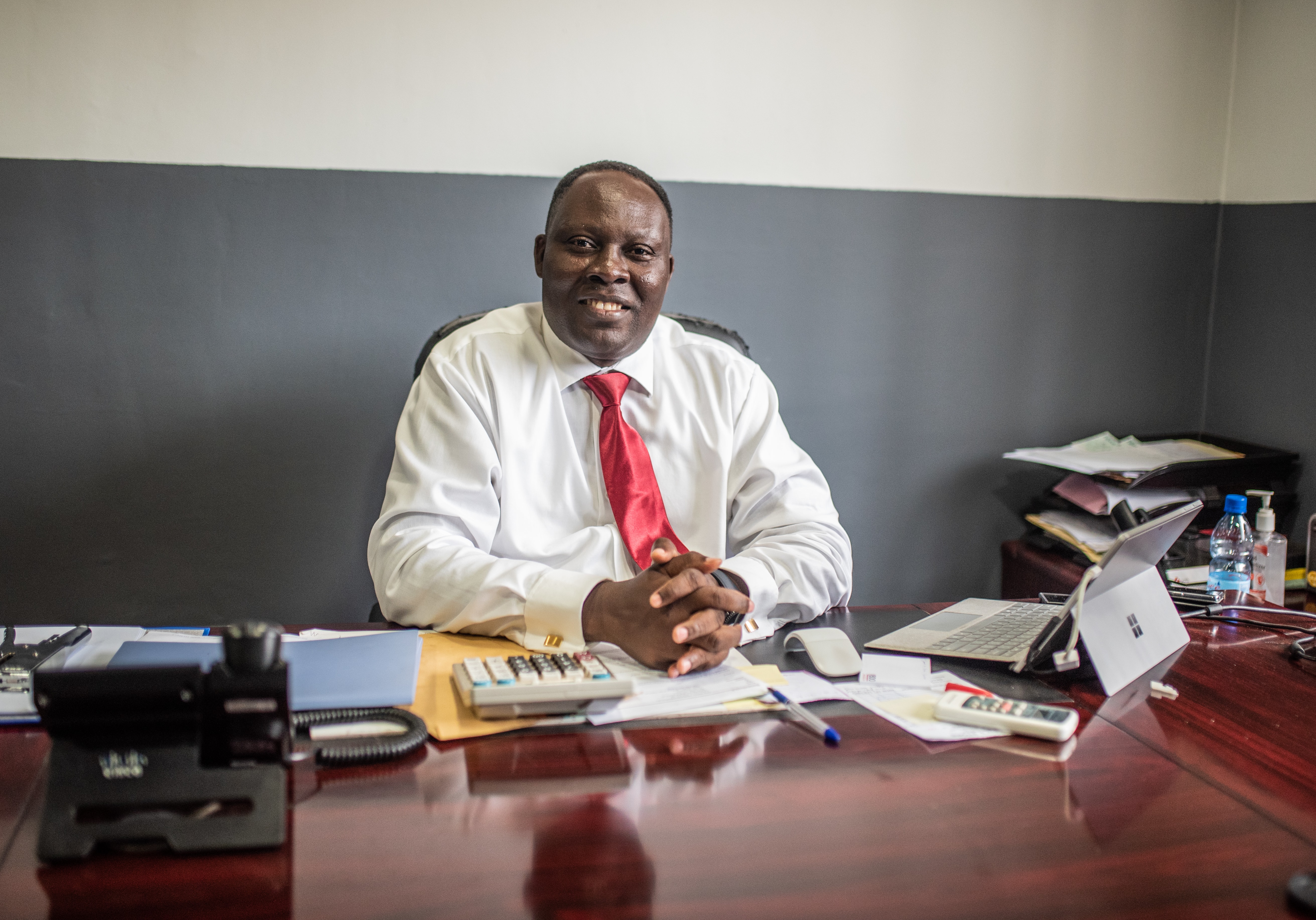 David Kamara at his office

A group of women selling different beauty products grouped together to apply for a loan from ACTB. One of them, Fatmata Sesay, says that it was easier to manage the loan repayments in a group. Fatmata and the other four women sell cosmetics and jewellery. They each started with very small stands and have grown their stock. Business is much better, says Fatmata, who can now send her three children to school without struggling. 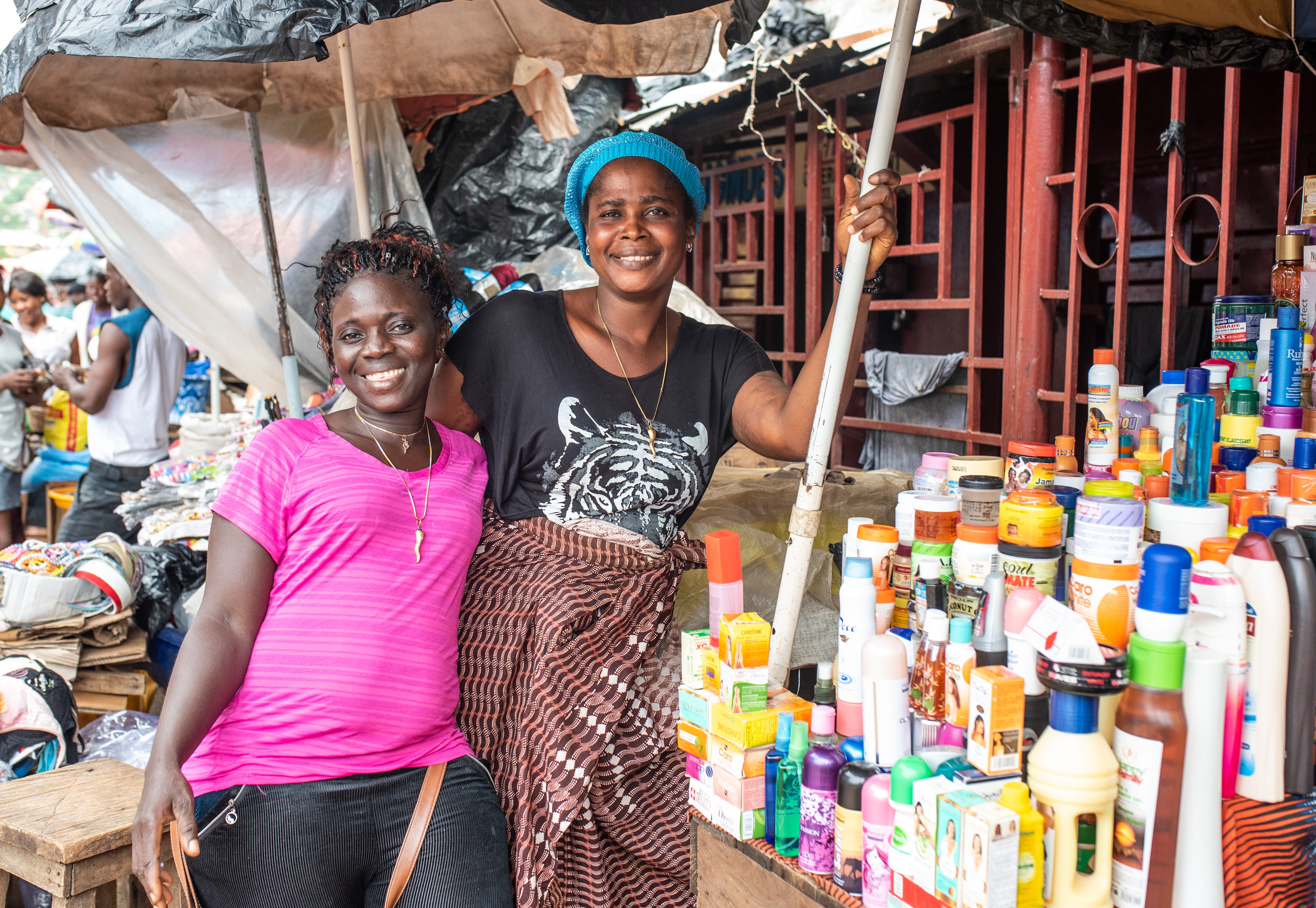 Fatmata Sesay and Yeno Sesay next to their market stalls

Another client, Yanoh Bangura, applied for his first loan in 2014, to set up a shop selling electrical equipment. He took another loan in 2017 for 6 million Leones ($779) to buy stock that he was missing. “People would come to me asking – ‘do you have this charger or that plug’ – I would make a note of their requests so that I could stock them next time. Now I am fulfilling my customers’ needs”, he says, smiling. 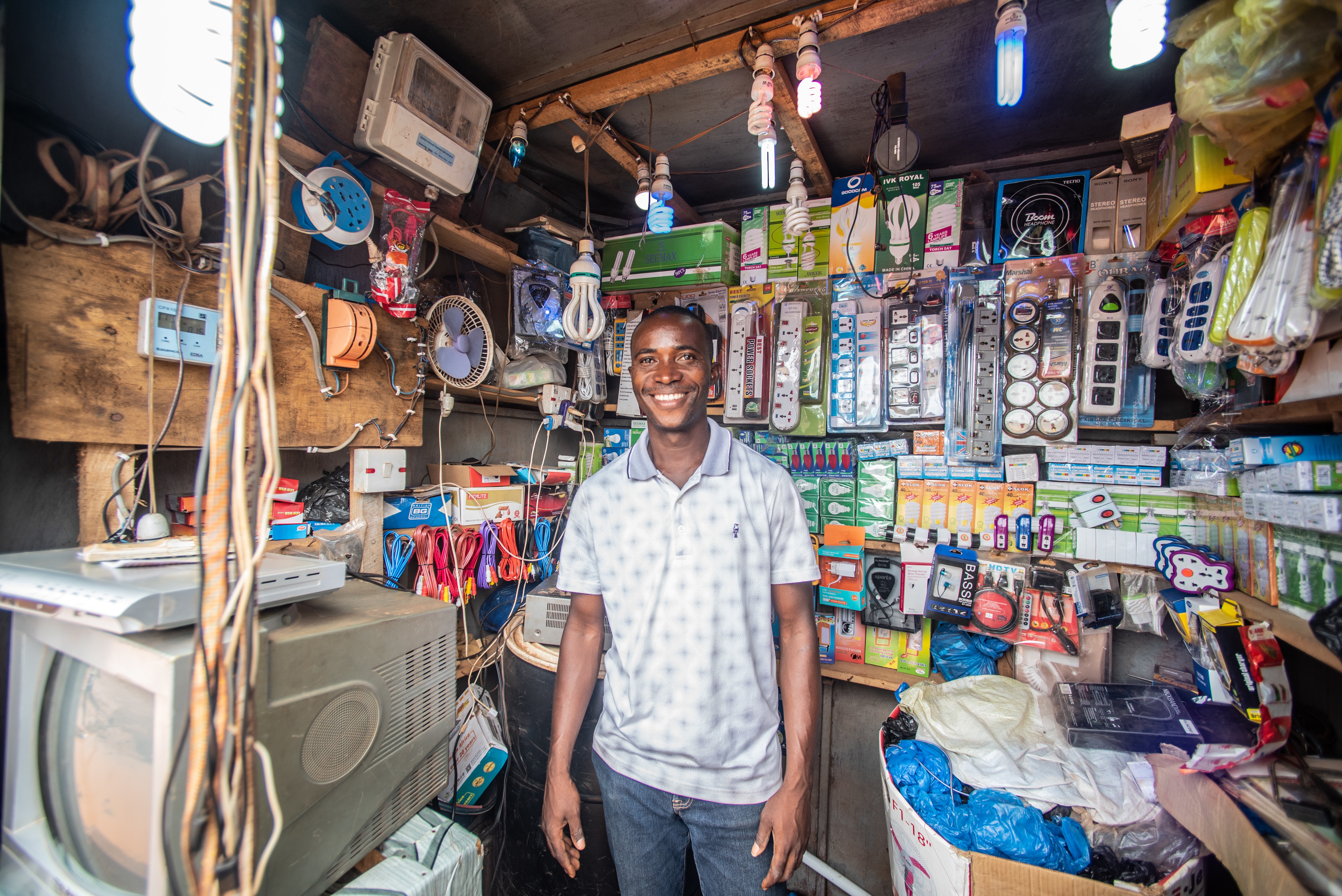 Yanoh Bangura in his electrical shop

Anna Nelson, is particularly proud of her business. What started as a cool box full of fizzy drinks has been transformed into a bar and restaurant with a large colour TV that pulls a crowd by showing football games. She says she has a lot of customers and through her business has been able to look after her family. “It started off with one loan for 3 million Leones ($390)”, she says. “After that I took out three more, because business is good I have never had problems paying the money back”. 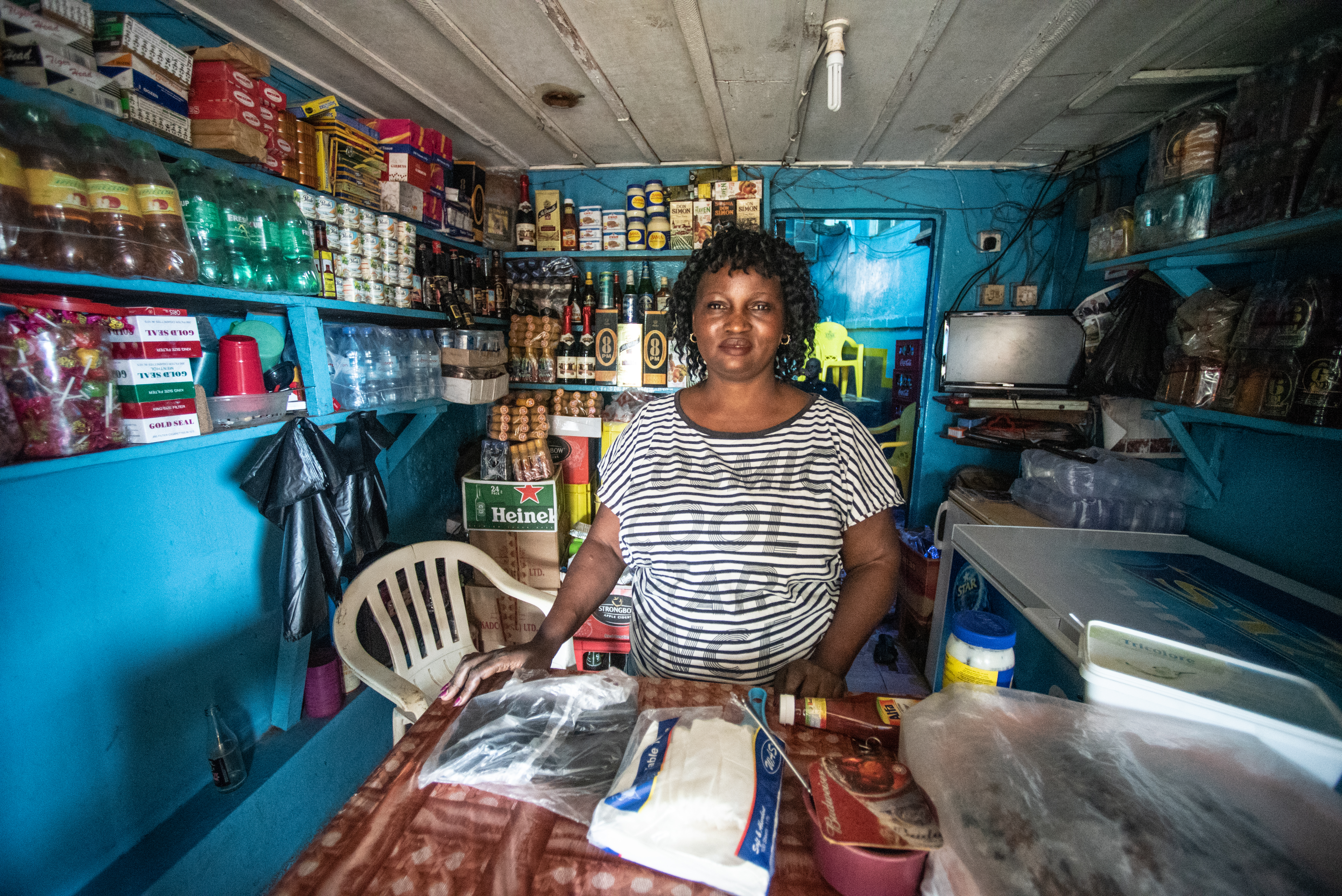 Anna Nelson in her restaurant

Both David and Michael Kamara are delighted to see their clients happy and fulfilled. They are positive about the future of loan companies in Sierra Leone. “I see a great future for the work we do”, says David Kamara, “The government are always talking about things like building roads into the countryside. To be honest most people in Sierra Leone barely have enough money to travel on those roads. This is